With the first gathering being held in 1911, IWD is a global celebration of the social, cultural, economic and political achievements of women past and present. This day signifies the progress made in terms of gender diversity and acts as a reminder for the work that still needs to be done to achieve full equality.

Despite the considerable strides we have made over the last 100 years in building a more equitable society, the World Economic Forum’s Global Gender Gap Report 2020 revealed that at the current rate of change, it will take yet another century before gender parity is achieved.

Whether it’s smashing the glass ceiling, closing the gender pay gap or eliminating discrimination, IWD is a time to inspire and instigate change.

Be apart of the change you wish to see

We believe our four core pillars are data, creativity, technology and innovation, all of which are embodied by the women making a difference here at Ambire. It’s because of their incredible achievements and contributions that we’re the high-performance agency you see today.

With a strong commitment to diversity and inclusion, today we celebrate not only our Ambire team but the success and accomplishments of our female clients, their customers and all women across the globe.

We’re committed to challenging the status quo and creating a more supportive and encouraging environment where women can thrive and reach their full potential. By fostering a culture of inclusive leadership here at Ambire, our team is determined to break down the barriers to entry for those who are most at risk of being excluded.

There’s still progress to be made

This year, the UN Gender Equality Agency and Global UN Women theme will focus on “Women in Leadership: Achieving an equal future in a COVID-19 world”. This global campaign will help recognise and celebrate the many accomplishments of women and girls around the world in creating a more equal and inclusive future.

Let’s not forget the incredible achievement of Kamala Harris, who broke the glass ceiling and became the first female, Black, and South Asian American Vice President of the United States. These inspirational and transformational women have brought the many benefits of diverse perspectives, skills and experiences to the fore.

Just one of the 25 ASX 200 organisations has a woman as their CEO. Not to mention, women comprise around 47% of all employees in Australia, but still earn $253.60 less than men on full-time earnings, every week. This leaves our national gender pay gap at 14% — a number that has remained largely stagnant over the last twenty years.

While all these women have achieved astonishing career success, they’ve often had to overcome adversity in industries with very low female representation.

Take part in this year’s #ChooseToChallenge

Whether you’re hosting an event, launching an initiative, managing a campaign, donating to a charity, or sharing inspirational stories from the women who’re dedicated to making a difference – there are countless ways organisations, groups and individuals can celebrate International Women’s Day. One simple, yet highly impactful way to show solidarity is to take part in the IWD #ChooseToChallenge social media campaign.

According to the IWD website – “A challenged world is an alert world. Individually, we’re all responsible for our own thoughts and actions – all day, every day. We can all choose to challenge and call out gender bias and inequality. We can all choose to seek out and celebrate women’s achievements. Collectively, we can all help create an inclusive world.”

In the lead up to IWD 2021, individuals and organisations are encouraged to snap a picture of themselves raising their hand high and sharing it on social media along with the Choose To Challenge hashtag. The aim of the post is to encourage people to show their commitment to challenging inequality, calling out bias, questioning stereotypes, and helping forge a more diverse and inclusive world.

If you’re part of a remote-based team or working from home thanks to COVID-19, don’t be afraid gather the team in a virtual chat room, strike the #ChooseToChallenge pose and create a collage of selfies in support of the campaign.

So together, let’s all show our support, stand together in solidarity, and choose to challenge. 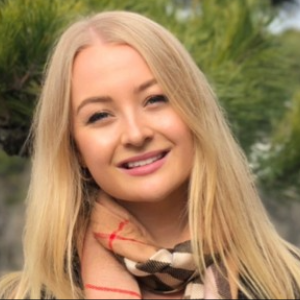 Driven by the desire to further enhance her knowledge and understanding of SEO and digital marketing tools, Chloe joined the Ambire team in 2020 as a Junior SEO Specialist. With a strong passion for digital strategy and a background in B2B content creation, Chloe is dedicated to achieving strong campaign performance and deliverables for our clients.
Quick Contact